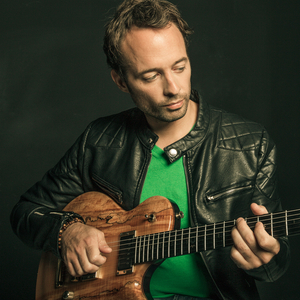 My approach is similar as what I learnt form the USA method.
I try to know exactly what students wants to learn to keep motivation. I also provide extra contents as tablature, sheet music to help student working at his own.

Class is for intermediate to advanced level.

Working in the music business since 25 years, I won number of prizes at various competitions and exhibitions as guitarist and composer.
With an interest to all existing types of music and enriched by many collaborations, I define myself as a multi-skilled artist.

After studying at the famous Musician's Institute in Los Angeles, I became a professional with many bands, and notable studio and multimedia work to my credit, such as the grand opening of the Hard Rock Hotel in Florida, the Halloween parade in New York or the arrangement of the song which will defend Monaco at Eurovision 2005.

In 2015, I won first place in the JTC Guitar Contest among more than 2000 guitarists around the world, preceding my integration into the team based in England, releasing 10 instructional videos to date.
In 2016, I placed 2nd in the worldwide competition The Guitar Idol after having defended one of my original compositions at The 100 Club, a famous London concert hall.
I recently work for video games industry composing several songs for the game Citywars Savage, available on Steam.

My first album Rainbowmaker is available on streaming platform.