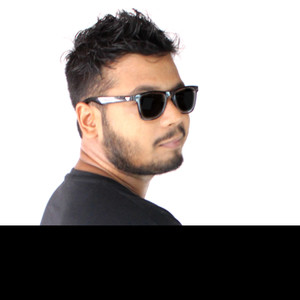 Professional Drummer gives lessons in staff notation to the students of all age.

A drummer has to be on click when it comes to big concerts, so the basic is to play on a metronome (a device used by musicians that marks time at a selected rate by giving a regular tick).

Dipanjan Dey’s drumming career has been a fledgling one thus far, but during his relatively short time as a drummer, he has made quite a name for himself. Known primarily as the drummer for The Monkey's Smile, Diya Ghosh, DA Project, former member of SHRAP . Dipanjan has firmly established himself as one of the city’s most promising young musicians.
Having spent most of his childhood days listening to bands of substance such as Dream Theater, Havok, Korn, Pantera, Slayer, Sepultura, and Slipknot, Dipanjan took his first steps in pursuit of a career in drumming in 2008. He enrolled in the renowned Calcutta School of Music, hoping to hone his skills and imitate the success of his favorite drummers. Growing up listening to the likes of Mike Portnoy, Joey Jordison, Igor Cavalera, and Roy Mayorga, Dipanjan acquired a taste for metal drumming. The hard-hitting styles of old-school thrash metal and ‘90s born were his comfort zone.

Today, with aggression as the focal aspect of his drumming, Dipanjan focuses on writing groovy drum parts, as is evident from his work with the band The Monkey’s Smile and Shrap. Dipanjan’s work with Shrap from 2012 to 2017 has been nothing short of stellar. Apart from helping Shrap to numerous band competition titles across the country and cementing their status as a frontrunner in Kolkata’s metal scene, Dipanjan has also contributed immensely to their EPs and their reputation for delivering energetic live performances.
Dipanjan also had a short stint with composer Chandrachur Mukherjee and his world music line-up in 2015. Even though the line-up never went live, Dipanjan widened his horizons and tried his hand at musical styles such as bossa nova, country, jazz, pop, reggae, and tango.

In terms of individual accolades, Dipanjan’s first milestone came in 2013. His playing at Calcutta Medical College’s annual band competition earned him the Best Drummer award. What followed was an endorsement with Hybrid Sticks, well and truly confirming Dipanjan’s arrival as a top musician in the making. In 2014, he made the top 5 in Foxy Drummer’s World Drum Solo competition and bagged yet another endorsement, this time joining hands with Kolkata based drum makers Bronz. He also represented India in Drumoff Singapore 2017.
His achievements in a short but eventful drumming career are quite remarkable, and he can only be expected to learn and achieve more in the coming years.